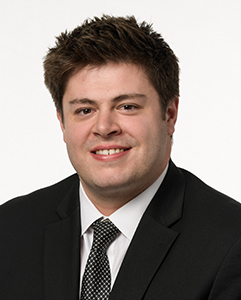 Samuel became a member of Chambers’ London branch in October 2019 after successfully completing his pupillage. He was called to the Bar in 2018, and achieved the highest mark out of the Lincoln’s Inn cohort. Before undertaking pupillage, Sam obtained a Distinction and a prize on the BCL at the University of Oxford, and graduated top of his year in Law at Queen Mary University of London. During pupillage, Samuel assisted in a broad range of commercial, insolvency and property disputes.

Samuel accepts instructions in all of Chambers’ main practice areas. He regularly appears in the High Court and County Courts, and has a busy paper practice.

Samuel is now acting for a liquidator as first junior to James Pickering QC in two ongoing and related multimillion-pound disputes. The two cases are proceeding in the Commercial Court and are complex civil fraud matters, one of which involves 25 parties.

Samuel regularly represents office holders, creditors and debtors in all aspects of corporate and individual insolvency. His recent experience includes acting and advising in relation to:

Samuel has an interest in claims involving misfeasance, accessorial liability and fraud in an insolvency context. He has recently been instructed by a liquidator in enforcement action arising out of a judgment entered against a misfeasant director of a Jersey company for approximately £1.3M; Samuel was instructed to apply for final charging orders to be made in respect of shares in various companies belonging to the misfeasant director. During pupillage, Samuel shadowed James Barker in a case where liquidators were pursuing claims against a bank for dishonest assistance arising out of a MTIC VAT fraud involving carbon credit trading. Samuel also shadowed James in the trial of Hellard v Macetone Limited & others [2018] EWHC 3307 (Ch) where the Court found that the company’s money had been dishonestly misappropriated by a director, and that the company had a proprietary interest in a property purchased using money that had been misapplied.

Samuel acts and advises in relation to all aspects of commercial litigation. He represents companies and individuals on a range of matters including: acting on interim applications of various sorts (e.g. for interim injunctive relief, security for costs, setting aside judgments); advising on the interpretation and effect of contracts and remedies for breach; drafting proceedings and acting on contractual, tortious and equitable claims; cases concerning sale of goods, supply of services, and guarantees; and enforcement proceedings.

His recent unled experience also includes advising and acting on matters involving allegations of deceit, negligent and fraudulent misrepresentation, breach of contract, conversion and wrongful interference with goods, unlawful interference with trade, undue influence, and lack of capacity. Samuel has also recently advised on the question of whether a contract contained an unenforceable penalty clause; on whether a freezing and proprietary injunction was at risk of being discharged for material non-disclosure; and in relation to the termination of an insurance policy on the basis of anticipatory breach by the insurer.

Samuel is quickly expanding his practice into cases involving fraud and asset tracing. He is acting for a liquidator, led by James Pickering QC, in two related and complex civil fraud matters. One is a claim for in excess of £100M which involves allegations of fraudulent breaches of statutory and fiduciary duties, dishonest assistance, knowing receipt, bribery and conspiracy. The other concerns an application by the SFO to enforce one of the largest criminal confiscation orders ever made in the UK against various specified assets (to which 24 other parties have asserted their own proprietary and/or personal claims).

Samuel recently appeared with James Pickering (being led by PJ Kirby QC) in a security for costs application where the High Court for the first time required a defendant to provide a fortified cross-undertaking as a condition of the claimant giving security for costs.

Samuel is developing a broad practice in property law, and has experience in cases concerning mortgages (acting for lenders, borrowers and receivers), easements, possession claims, contracts for the sale of land, nuisance and trespass to land, applications for charging orders, TOLATA claims, rectification claims, boundary disputes, and restrictive covenants.

In addition to his property practice, Samuel has a strong practice in residential and commercial landlord & tenant law. His recent unled experience includes:

Samuel also has appeared in the First-tier Tribunal (Property Chamber).

During pupillage, Samuel observed, as a judicial marshall, the High Court trial of Wood v Commercial First Business Ltd (In Liquidation) [2019] EWHC 2205. This was a mortgages case which dealt with a number of important questions including the remedies available to mortgagors as against lenders where a lender pays “fully-secret” or “half-secret” commissions to a mortgage broker who is a fiduciary agent of the mortgagor, and whether in order for a deed to be validly executed the witness must sign in the presence of the person executing the deed.

Samuel is developing his practice in all areas of company law and general chancery, and has recently worked on a number of cases involving allegations of breaches of directors’ duties, accessorial liability, and asset tracing. He will accept instructions in a broad range of company law matters, for example relating to shareholders disputes, shareholders’ agreements, service agreements and restrictive covenants, unfair prejudice petitions, questions concerning unlawful dividends, construction of articles of association, company restorations, and applications to extend time to register charges. Samuel will also accept instructions in matters concerning LLPs and partnerships.

Samuel is building his practice in this area. He has recently advised in relation to a potential claim against a firm of solicitors for various failings in the conduct of litigation, and for failure to make a claim on behalf of a client on an ATE insurance policy within the appropriate time limit.

Samuel is developing his practice in all aspects of Wills, Trusts & Probate, including TOLATA claims, wills and trusts, family provision, claims relating to the enforcement of judgments.

Philosophy and Theology (BA Hons), The University of Oxford (2011-14): awarded The Emmanuelle Prize for Academic Achievement.